I often hear conspiracy theorists declare we should do our own research and work it out for ourselves. Wake up, sheeple!

And I would definitely encourage everyone to educate themselves as much as they can. It’s a good thing to learn to check sources of information. It’s good to recognize bias in media reports. It’s a good thing to develop a skeptical, curious mind that’s open to be changed as we come across new points of view.

Here’s the thing though: we really can’t work out the world by ourselves.

It’s not that we’re dumb or too lazy to do the research. It’s that there’s just too much to know about almost any subject under the sun.

Back In the 18th century it was probably possible to learn all there was to know about geology in a year. Then you could devote the next year to philosophy. The next to physics. You could be self-educated in all the world’s knowledge and hold your own in any discussion.

But these days it’s just hopeless. You could spend a lifetime trying to learn about mosquitoes and not get to the bottom of it. Or water. I have a friend doing a PhD in water, for crying out loud – she tells me there’s loads of stuff about it we haven’t worked out yet.

One of the most important lessons I learned in school was when our religious studies teacher told us, a class of fourteen year olds, that our opinions were not of equal value. We exploded in adolescent indignation: no one could tell us we couldn’t have an opinion!

‘Really?’ he said, pointing out the window at the sky, ‘would you say those were cumulus, stratus or altocumulus clouds coming towards us?’

We didn’t know. And we got the point that while we had the right to have an opinion on anything, that didn’t mean they were necessarily that valuable.

In general, humans seem to have a pretty high opinion of themselves. You might have noticed that almost everyone thinks they have good taste, a good sense of humour. Can they all be right?

Psychologists have a name for this: the Dunning-Kruger effect (we really needs to come up with better names for this stuff). It describes the tendency we have to think we understand more about something than we do.

The original title of the study was: “Unskilled and Unaware of It: How Difficulties in Recognizing One’s Own Incompetence Lead to Inflated Self-Assessments” and, entertainingly, it featured a bank robber who covered his face with lemon juice under the belief that security cameras wouldn’t be able to see him. Lemon juice, after all, is a great way to write in invisible ink. 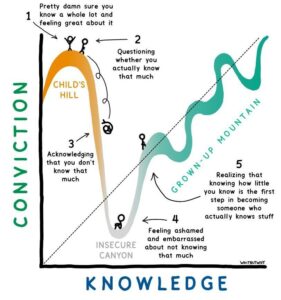 We can see this play out all the time in real life.

When we don’t know much about a topic it seems quite open and shut. We have clear, confident opinions and don’t see why others would disagree. The less we know about something the less we think there is to know about it.

The more we learn about any subject, however, the more we’re aware of how much there is still to learn. We realise there are no easy answers and that the truth is usually quite complex. We acknowledge doubts, other points of view and how we can never really be certain of anything.

This is why we have experts. People who have spent most of their lives dedicated to understanding something. We have a right to an opinion but it’s not going to be of the same value as someone who really knows what they’re talking about.

If that sounds a bit disempowering consider how grateful we are for people who know more than us all the time: the pilots fly our planes, the physicists who make our phones work, the medics who save lives when we’re in an accident. And those are just the obvious ones. Imagine how much you have to know just to make sure trains don’t crash into each other every day.

Of course you can also become an expert in something. But it takes years of study, not a weekend watching Youtube videos. Unfortunately.

What you can do though is check whether there’s consensus about something among experts. You can also learn what counts as a reputable source.

Now that we’re seeing the planet suffer so visibly It’s less fashionable now to be a skeptic of human-driven climate change than it was a few years ago. But I still remember friends of mine telling me it was all made up, that they’d done their research and concluded that the whole thing was a scam. A ploy to sell solar panels.

They had come to a definite conclusion on one of the most complex scientific subjects there is – how our planet works – by watching a few hours of documentaries on Youtube. Job done.

It’s good to be skeptical. It’s good to ask questions. But the beginning of wisdom is not so much to know that we know nothing, but to know how much we don’t know.

That’s the essence of humility.

https://procrastination.com/blog/31/objectivity-dunning-kruger-effect – more on the Dunning-Kruger effect.

https://proto-knowledge.blogspot.com/2010/11/the-last-men-who-knew-everything.html – about the last people who actually could do their own research and find out everything.

https://yandoo.wordpress.com/2015/09/15/the-rejection-of-expertise-2/ – a thorough explanation of why experts matter and the folly or trying to become one based on a few hours of internet research.