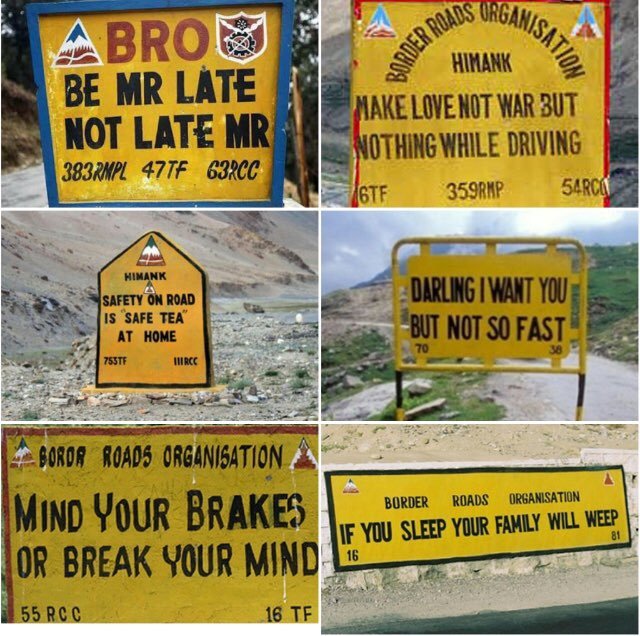 Many years ago, when I was wandering around India in search of Enlightenment, I used to get kicks out of the charming use of the English language in India: the road signs

Or the poster on the wall of the Air India office:

‘We hope you are not carrying explosives on board!

But the best of all was a popular fruit juice drink sold in a little carton with a straw – it proudly advertised itself with the assurance:

For a hippie like me, obsessed with eating everything wholegrain and as natural as possible, this was the ultimate irony.

I wanted to wear natural fibres, eat natural foods and take natural medicine when I got ill. Surely that was better than the synthetic, artificial, chemical products that the capitalistic world pushed on us?

particularly raged against the list of chemicals I read on the back of shampoo bottles – what the hell was sodium lauryl sulphate anyway? What laboratory nightmare had invented cocamidylpropyl?

Maybe these toxic chemicals were the reason behind my dandruff!

Every thing is a chemical

The world is full of things – trees, clouds, animals, rocks – and all of it is made up of stuff.
And stuff is…chemicals.

There are 118 chemical elements in the universe and 98 of these are on our planet. If you take those elements and jumble them around you can make everything that we know. Birds, soy beans, smartphones, crystals – they’re all made up of chemicals.

Us too. Most of the human body is made up of oxygen, carbon, hydrogen and nitrogen plus a bunch more chemicals in tiny amounts.

Basically everything is a chemical except for stuff like light, heat, sound or gravity.

Chemistry is knowing about what things are made of.

Take water – as everyone knows, water is H20: two bits of hydrogen and one bit of oxygen. Water is everywhere but we can also make it. Put the hydrogen and oxygen together, add a bit of energy and, if you don’t blow up the laboratory, hey presto! – you’ve got a cool drink.

It’s amazing when you stop to think about it. Some of the same stuff that is in a banana is in our nose. It’s like the world is this fantastic magic ball where you shake around the tiny bits of matter, and get everything from elephants to motorbikes, flowers to credit cards.

But things we find in Nature are better!

It’s at this point of wonder that my inner hippie rebels though and thinks, yes, ok, maybe but some chemicals occur naturally, you know, in Nature, not like all those nasty poisonous ones that humans made.

And it’s true that there is a distinction. There are chemicals that we find in the world around us and there are those that we have invented. But the ones we’ve invented are still just chemicals jumbled up to make something new.

Nature did the same thing over a few billion years.

Think about salt for instance. It sounds a bit scarier when we call it sodium chloride but that’s what it is. One bit of sodium and one bit of chloride. Sodium is a wild metal that bursts into flame if it comes across water. Chloride is a gas that was one of the first instances of chemical warfare in World War 1.

Neither of which bothers us when we sprinkle salt on our food.

When we think about what is natural and what is not it’s also worth remembering that humans are part of Nature. We’re rather clever apes. And we’ve used our brains to make things that don’t occur naturally for a very long time.

Take bronze, for instance. It’s a mixture of copper and tin and we probably discovered it by accident in the remains of a fire pit. Bronze doesn’t occur naturally anywhere but it changed the world when we started to make it 4500 years ago. Before that we had to use stone tools. And bronze didn’t rust so it let us make tools and ships so we could sail the world.

But why take our chances with toxic chemicals?

If there’s one thing we’re afraid of it’s poison. It’s like an invisible enemy, contaminating all that is good and fresh and natural. It can be in our food, in our water, in our clothes, in the air we breathe.

That’s why detox diets sound so intuitively good. It’s why so many alternative medicine therapies claim to remove toxins from our bodies. We long to be pure and healed again.

I remember a conversation with a friend who thought that eating organic food was a no-brainer. I observed that people are living longer and longer lives so non-organic food doesn’t seem to be killing us off that fast.

‘But even if there’s only a little bit of poison in non-organic food, why would I expose myself to it?‘ she reasoned. More toxins, surely, would be worse.

The odd thing about poison is that it’s everywhere though. Plants themselves produce their own toxic pesticides to protect themselves from insects. At the right dosage, all of these could kill us.

It’s estimated that of all the pesticides we eat in our food every day, 99.99% of them are naturally occurring. And at the right levels they could cause cancer. Here’s a short list of fruits and veggies that contain natural carcinogens:

A little drop of poison

When we think of poisons in nature, creatures like snakes, spiders and scorpions come to mind, but the most deadly toxin known in the world is the botulinum toxin produced by a bacteria found in the soil. It’s a million times worse than anything we’ve invented. 50 grams of it would be enough to wipe out all the humans from the Earth.

We use botulinum all the time though. For one thing, it’s good for reducing wrinkles on our faces.

Why would we use something so poisonous? 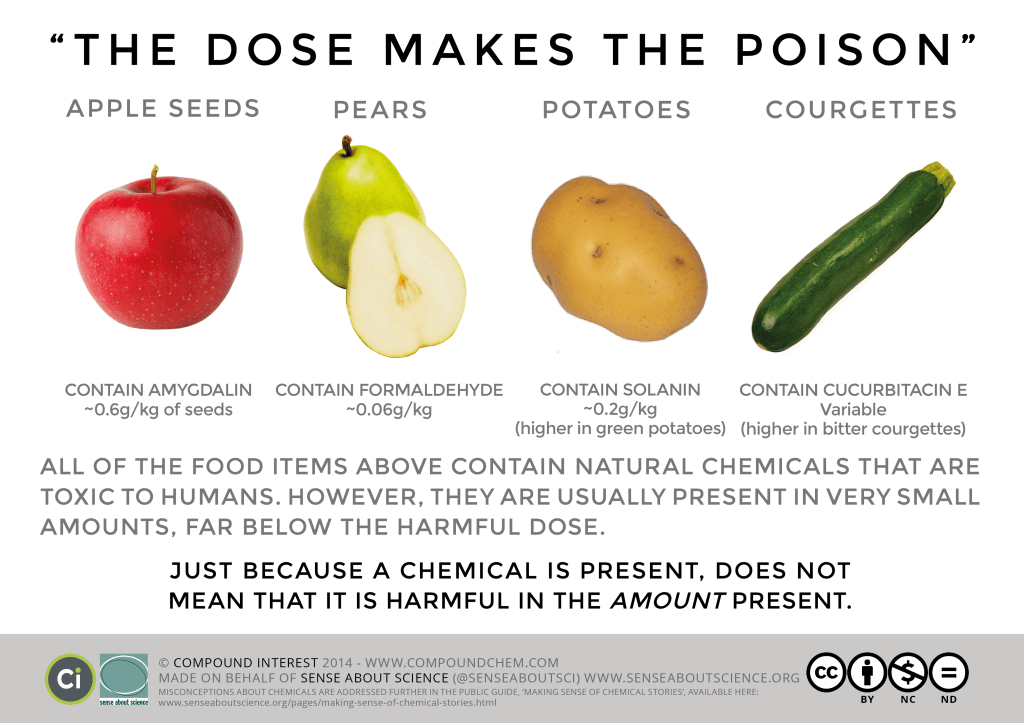 Because it’s all about the dose. Take formaldehyde, for instance. Anti-vaxxers sometimes point to the presence of formaldehyde in vaccines as evidence of something that should never be allowed to enter the human body.

If that’s the case we should all give up eating pears. There’s more formaldehyde in a pear than a vaccine.

But both are safe because when it comes to toxins, it’s all about the dose. Most people know that you can die from alcohol poisoning but did you know that water can do the same?

I grew up just at the end of the early 90’s rave party scene in the UK and ecstasy was showing people how happy one could be in the right circumstances. Emotionally-repressed British people were telling strangers how much they loved them and dancing together like the best of friends. A common scare story though was of the occasions that someone took ecstasy, danced all night and then drank so much water that they died. 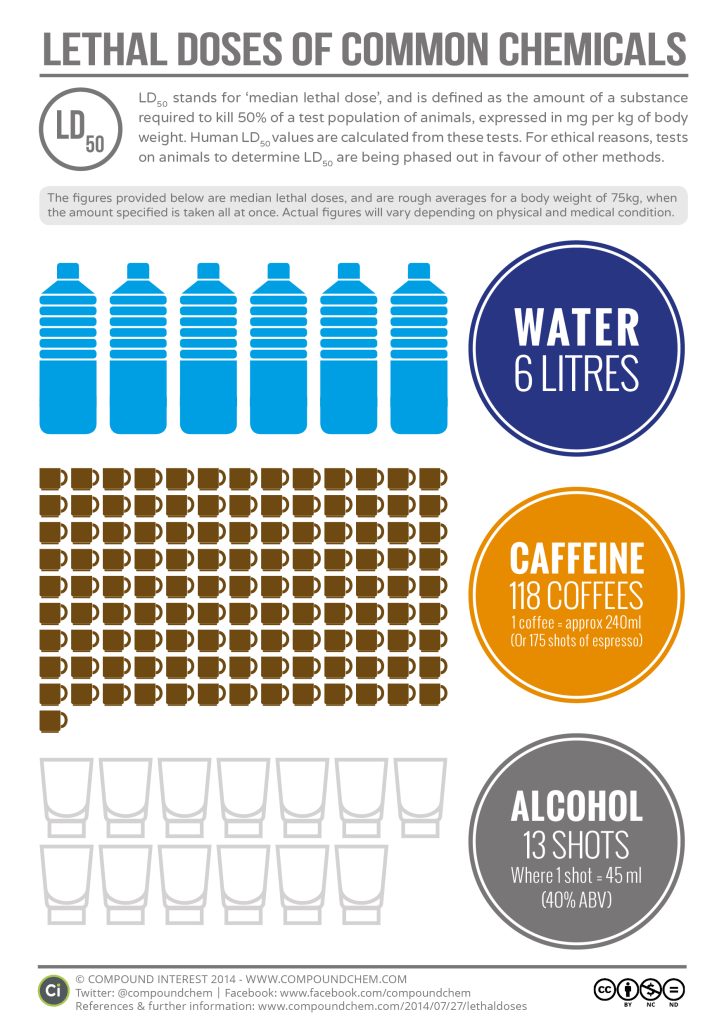 As the Swiss alchemist, Paracelsus, famously commented 500 years ago:

‘All things are poison, and nothing is without poison; the dosage alone makes it so a thing is not a poison.’

That’s not to say you should put washing powder on top of your pancakes instead of sugar. And sometimes the chemicals we’ve invented have had terrible effects.

Take DDT, for instance, an insecticide that was banned in the 20th century because of the devastating effect it had on eco-systems. DDT ravaged insect and bird populations and spread so far through the world that it was even found in the blood of polar bears.

On the other hand, DDT is the reason no one gets malaria any more in Europe or the US.

So are chemicals good or bad?

Hopefully by now we can agree that nothing is quite so black and white. Everything is made up of chemicals and some of them at the right dose can harm us.

But most of the time they don’t.

Moreover, the world of chemicals is a world of alchemy and magic. We don’t need to look at books of magic potions and spells to find a sense of wonder. The very building blocks of the universe are in the clothes we wear, the food we eat, in our own bodies.

We are the stuff of the Universe.