You know, back in the 20th century (how old do I feel just writing that?) if a friend at the pub told you something like cooking things in aluminium pots will give you Alzheimer’s!’ you really had no easy way to find out if it was true.

Yes, we had libraries but there weren’t sections on Common Materials That Might Actually Harm Your Brain In A Permanent Way.

You could always call up someone who you thought might know the answer. If they were home. But even if you knew a doctor or a biology student they were unlikely to actually know anything about scientific research into the safety of aluminium.

Sometimes the person who refused to eat your soup because you made it in a cheap pot (or who ate it but shook their heads ruefully as they did so) had a book that explained the idea. There it was. In print, A book that said that Aluminium Will Harm Your Brain in a Permanent Way.

Hard to argue with that.

Then, like a ray of light breaking through the clouds on a gloomy day came the internet. Sure, at first it was mostly half-finished blogs, spam and websites that played annoying jingles in the background, but quality began to emerge as people began to realise the internet wasn’t  going to just go away.

Newspapers and magazines started to be read more online than in the real world. Everyone had a handful of sites whose www. they typed into their browsers each day. And there was always Google, who knew all we wanted to know even if we were too afraid to ask.

Wikipedia was like the heaven of information. Even if a few demons did slip in here or there.

Then out of the blue, emerging like mythical sea creatures came the social media titans – Facebook, Youtube and Twitter. At first they were seen as a bit of a joke – I still remember journalists scoffing at the idea of any grown up ‘tweeting’ something.

In no time at all, however, we gave up on going to websites and just clicked on interesting links in our feeds. And who was sharing all this content? Our ‘friends’. It was like being at the pub again except now our buddies had entire libraries with them. Pictures and videos, too.

We had all become publishers.

What’s so bad about social media?

Social media is free. But it’s an old truth that if you’re not paying for something then you are the product being sold. Usually it’s just your eyes that are sold to advertisers. But now it’s our hopes and dreams, our desires and our fears, our likes and our loves.

Social media companies watch everything we do and then sell that information to companies who want to sell things to us.

To do that, they want us to spend as much time as possible on their websites.

And to do that they use science.

Ever notice how once you start eating junk food it’s hard to stop until you’ve finished the bag? The junk food companies have worked with scientists to develop just the right combination of fat, salt, sugar and even crunch to make their products addictive.

It’s the same with social media.

As we scroll through post after post, photo after photo, checking in to see how many people ‘like’ us and what we have to say, chemicals in our brains are released that make us feel good. Well, good enough to stay on the site a bit longer.

We’ve been turned into rats in virtual cages pawing away at levers for little drops of validation.

Ok, so nothing comes for free. Why is social media a bad place to get my info?

Just taking a wild guess here: if you care about the planet, are curious about how the world works and believe that love might just be the answer, I’m willing to bet you don’t get your info from Fox News? You probably don’t see too many links to Fox in your feed either.

But if you were an evangelical Christian into gun control and strongly against abortion, you would probably see links to Fox News all the time in your feeds.

Even when you search on Google you’ll get different results according to what you searched for in the past. Same on Youtube. These services know what we like, what we’re interested in, and what we believe. They know enough about human behaviour to mostly show us sources that we already agree with.

These are called filter bubbles.

Filter bubbles make it seem like everyone agrees with you. If you search for content about a conspiracy theory on Youtube, for instance, you’ll probably get recommendations at the end on the same topic. Maybe you weren’t convinced in the beginning but after you watch video after video after video it seems like it must be true.

But some 97% of climate scientists disagree. Would you remember that after watching hours of well-produced videos with mood music and charismatic presenters and a barrage of carefully-selected statistics?

But why can’t I just make up my own mind?

But it’s even more powerful because it involves people we know.

For almost all of human history we lived in tribes of no more than 100 people, hunting and gathering and…gossiping about each other. It was fun, no doubt, but it also helped us survive.

If someone did something wrong they might be thrown out of the tribe. And that meant almost certain death. There was just no way one person could survive on their own for long without the protection of their clan.

So it’s no surprise that we love to fit in. We evolved to do it.

This explains why what we believe is strongly affected by who we know. Most people today consider slavery to be a horror. But for thousands of years it was regarded as a perfectly natural institution. Were people less moral in the past? Or did they just believe what everyone else did?

In the famous Asch conformity experiment, people were asked to say which of the lines – a, b or c – was the same length as the line on the left. People got it right 99% of the time.

But then they tried the experiment again with a new group with secret actors inside who all agreed on the wrong answer. Now the other people in the group only chose the right answer 63% of the time.

Why did so many people get it wrong?

They wanted to agree with the rest of the group.

So while social media keeps you in a filter bubble where you only see content that you agree with, you’re also likely to be swayed by what your friends, family and community think.

If all your friends are against vaccines then that point of view starts to seem more reasonable.

But there’s good information on social media too! 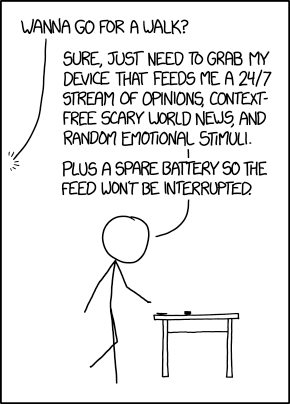 Yes, there are enough quotes, memes, photos and arguments to make any hunter-gatherer tribe’s head spin but the actual information can usually be found at the end of a link.

It’s worth your while to learn the difference.

Of course you might follow a friend on social media who regularly shares interesting articles and videos. We’re all publishers now, we’re all curators.

But in the slick interfaces of social media every link seems equally valid. The expert who spent her life studying something and published in a respectable journal…and the amateur who found that  talking to his webcam on Youtube was a good way to get some attention.

Back in the last century, when someone in the pub had a particularly wacky opinion it didn’t tend to go any further than that. He was laughed down by the other regulars. But now the internet is a pub big enough for the whole world to gather in it.

And there’s a table for every opinion under the sun. Even those who think that aluminium pots will make us lose our minds.

https://medium.com/@orge/your-brain-is-being-hacked-by-social-media-584ac1d2083c – how our brain is hacked by social media

https://www.ted.com/talks/tristan_harris_how_a_handful_of_tech_companies_control_billions_of_minds_every_day?language=en – Tristan Harris’ talk on how a few tech companies have taken over our lives