If there’s one phrase that tends to unite spiritual people around the world it’s this:

Everything happens for a reason!

But does it? What about all the bad stuff?

Yes! The bad things that happen are just so that the good ones can come along!

It’s all part of a bigger plan!

Another common mantra is there’s no such thing as a coincidence – although few people would deny that two or more things do happen at the same time (all the time in fact!) the suggestion is that there must always be a connection.

People have always believed things happen for a reason

Certainly for most of human history people have believed everything happened for  a reason. When plagues came, crops failed, children and mothers died at birth or one side won a battle, people thought that a higher force was responsible. Maybe a god, maybe a spirit, maybe a demon or an angel.

The good things that happened were because a god or a spirit was happy with us.

The bad things that happened were punishment for what we had done wrong.

The response to misfortune was usually to try to please the powers that be. Perhaps the gods wanted more sacrifices? Should we go to church more often?

The other response was to find someone to blame. Who was bringing down this divine wrath? Perhaps it was the Jews, the gypsies or any woman who could safely be accused of being a witch.

When the AIDS epidemic began in the 1980’s for instance, there were no shortage of evangelical Christians who were happy to say it was a divine punishment on homosexuality.

In modern times when fewer people believe in the supernatural we turn to beliefs in secret societies of bankers, government agencies or even prominent celebrities to explain why things happen. Covid-19 was Bill Gates’ master plan!

They must happen for a reason.

But this is different! I just feel that everything is connected…

Or perhaps we look to the butterfly effect where the beating of a butterfly’s wings can cause a hurricane somewhere else in the world. But it doesn’t really work like that – and luckily so or there be an awful lot more hurricanes in the world.

We all try to understand the world around us. We read, we think, we talk to other people, and we come up with conclusions about what is true and what isn’t. But there’s a big problem: you’re using your brain to do it.

What’s wrong with your brain?

For one thing, we just love to see patterns whether there are any there or not.

Take, for example, the toasted cheese sandwich with the image of the Virgin Mary on it.

It has a bite missing because the woman who made it had just taken her first mouthful when she saw the ‘miracle’. She kept it for 10 years before deciding to share it with the media and a casino in Las Vegas ended up buying it for $28,000

If the sandwich had been made in say, Tibet, it probably would have been eaten straight away. Only someone coming a Christian culture would have seen the Virgin Mary there.

When these images of Mars were first seen there was some excitement as there seemed to be a face sculpted into the surface! Artists on Mars!

It turns out it was a trick of the light but our tendency to see faces everywhere is part of what it is to be human.

I was once in Panama City and a guy came up to me in the street and offered to explain the true nature of the Universe for a cup of coffee. It seemed like a good deal so I took him up on his offer and we headed to a cafe where he made my head spin with a pencil and a bit of paper. When you added up the numerical value of each letter in all kinds of important words like love, Jesus, God and I can’t remember what – it all came to the same number!

I can’t actually remember the number now but for half an hour I felt like I held the secrets of Creation in my hand. It was only when I tried to explain it to someone else later that it fell to bits.

A similar phenomenon happens to those who fall into rabbit holes like the Bible Code.

What could be more powerful than discovering that one of the oldest books in the world has a code inside it, presumably written by God himself?

Thing is, if you play around for long enough you can eventually find just about any pattern in anything.

Here you can find more fun with Bible codes.

Where it gets scary is that we can be manipulated into hearing and seeing things that we didn’t otherwise perceive. In the 1980’s there was a big scandal alleging that many popular songs played backwards held Satanic messages.

But as this video demonstrates, you often only hear a vague pattern if you’re told to look for it.

So why do we find patterns everywhere?

Humans run the planet today.  We and the animals that some of us eat account for 96% of all mammals in the world.

Still though, when you pass by a big dog in the street some instinct might be triggered about what it might have been like to be hunted by other big animals. In fact, for almost all of our evolutionary past, all we had to defend ourselves against saber-toothed tigers, enormous bears and crocodiles were sticks and stones.

But imagine you were one of our ancestors on your way back to the cave with a few stolen bird eggs and suddenly you hear something in the long grass. Depending on what kind of personality you had you might have either:

The second kind of person tended to live longer and have more children than the first kind. And to some extent their children would have inherited their cautious genes. Repeat that over several million years and voila! You have modern humans with an inherited taste for looking for patterns.

Humans didn’t come out of an egg ready-made, nor were we bought on special offer at the supermarket (as I plan on telling my kids). Everything about us from the shape of our teeth to the size of our lungs to the colour of our skin is because of evolution.

At some distant point in the misty past it helped us survive a little better.

Of course it was a long time ago and no, we can’t know with certainty.

It’s certainly easier to look at leftovers from our ancestors like our tail bones or the way we get goose bumps when it’s cold.

But we do understand how evolution works and we know that how we behave is a big part of that. We know because we can see how apes and chimps and bonobos behave today..Gossiping, showing off, flirting, bullying and looking for patterns are things that they all do to thrive and survive.

Even pigeons do it. 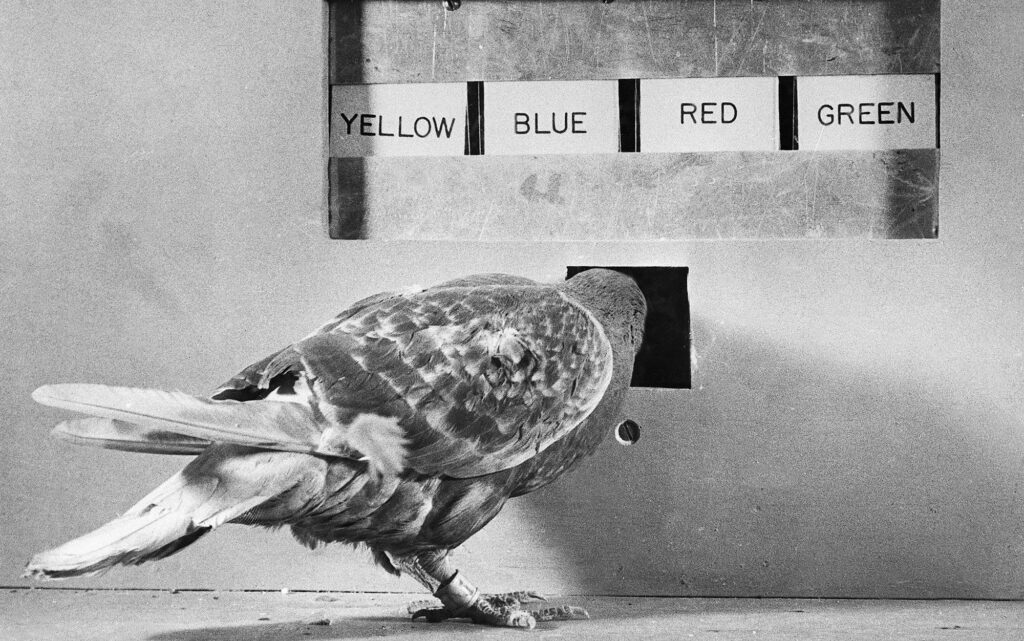 In 1947, a psychologist called Skinner put some pigeons in a box and gave them food at random intervals. But the pigeons learned to associate the food with whatever they were doing at the time. So if they were pecking the wall, they pecked some more, hoping it would give them more food. If they were flapping their wings, they flapped their wings some more. One bird believed that turning around 3 times anti-clockwise was the way to get more food.

Pigeons look for patterns that aren’t there, too.

I don’t get it, do things happen for a reason or not?

But I also wrote it because the covid-19 pandemic left me with more time on my hands than usual. And because I took an interest in writing even as a kid. And because…well, we can see that there isn’t a single cause. Everything happens because of a countless little influences that come together in one effect. 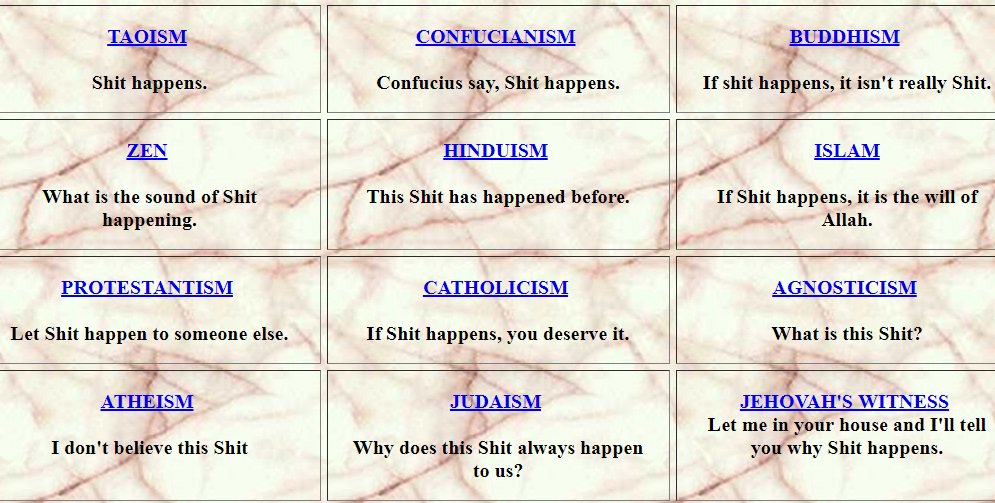 Imagining that everything happens for a reason can be a helpful attitude at times. When things aren’t going our way we can at least try to learn from the experience and make the best out of it.

Sometimes we can even do something about it. Like when a black man is murdered by the police in public there are certainly reasons for the injustice that need our attention.

But telling someone that their current suffering is all part of a bigger plan is a terrible thing to do. It shows a profound lack of compassion and empathy.

https://www.youtube.com/watch?v=b_6-iVz1R0o – Michael Shermer talking about ‘patternitis’ and how it affects us

https://www.theatlantic.com/technology/archive/2012/08/pareidolia-a-bizarre-bug-of-the-human-mind-emerges-in-computers/260760/ – how even computers see faces in nature and everyday objects

https://en.wikipedia.org/wiki/Apophenia – while the term ‘patternitis’ is more easily understood it’s usually called apophenia. Some great examples here of how gamblers, sports commentators and financial analysts see patterns that aren’t there.